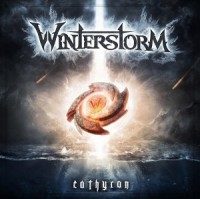 Some people almost preach it: Clichés should be forbidden! Or at least restricted. Especially with genres like folk or power-metal, which basically consist of clichés. I’m one of the people who think that clichés are there with a reason, otherwise they wouldn’t be just that; clichés. Clichés are good, but only if they’re well executed.
A band which made this into an art is Winterstorm. These 5 German guys make power-metal just like it should be. Energetic, fast, melodic, a lot of keys and guitar violence, and ridiculously catchy. This basically sums up how the record sounds. And while power-metal quickly bores me, Winterstorm could bother me for almost a full hour. From the catchy choruses to the lovely melodies. Everything falls within the power-metal cliché, though it’s so well executed that it couldn’t bother me for a single second.
This is a CD that shows how powermetal should be. It’s never boring, and it’s hard to sit still when you listen to it. An excellent record with songs that would do extremely well when played live. Check this out!