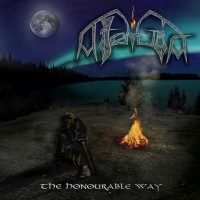 AfterGod is an Italian band which exist for quite a while, but since they found a female singer they have reworked their songs and concentrated on the recording of a demo. This demo is entirely on Soundcloud.
The demo starts with the epic intro ‘Old Viking’s March’, nicely done, it’s hard to believe this is only a demo and my expectations of ‘The Honourable Way’ are high by now.
The second track ‘We Ride’ starts with a keyboard. Not the strongest opening, but as a fan of Geddy Lee, I love the bass heralding the real start of this song. The ‘violin’-sound is gives it a nice taste and oh my, what a nice voice is thrown in by Virginia. The song goes at high speed as you might expect with the title already and it has such an energy, and such nice examples of the skills of musicians as we seldom get in folk-metal, I’m blown away.
Where there is a leading role for the violin in the last song, there is a accordion sound in Para Bellum. Another decent track, with a nice male choir which prepares us for battle.
And the Moon might be waning in the last track, the strength of AfterGod isn’t. The keys are back in the their original keysound, the guitars are still solid and the drums are fierce once more. And powered up with the nice vocals they end this nice demo.

One of the nicest demo’s of a starting band I’ve ever heard. They have a nice clean folk-metalsound with rather classical sounding female vocals, for the fans of Fenrir and Cryptic Age. The recordings are done nicely and the songs are good. The sound is well balanced and female vocals are very nice. AfterGod has done a great job with this demo, it show perfectly what they’re capable of. Let’s ride…