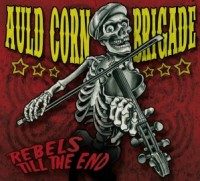 Auld corn brigade started out in 2006 in the cellars of an distillery. They combine Irish folk with punk, a kind of music which is at it’s best, consumed live. The sloppy character of the punk is difficult to catch on a record in a nice way.
Auld Corn Brigade has also difficulties to do this. Unfortunately I’ve never seen them live, but they seem to have problems to record it all, without sounding to ‘messy’. It took them a long way to get to this point, and they still have some to learn. But there’s growth in their music, the compositions have become much better, which is proven by nice songs like Sheila and Shawn, and Rebels we Are. But this last one is also a good example of what’s wrong with their music. The vocals are a but clumsy here and there. This is probably not a problem at a live performance, but on a record it is.
Their music is happy, joyous and has a carefree tune in it. Its music interwoven with some historical events important to the Irish and known to all. Though it’s a fine album, I believe they could have done better.