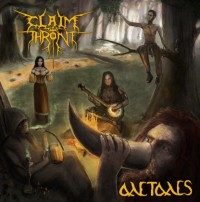 Folk / Battle Metal from Australia, when I was presented with this I had no idea what to expect. Australia is not exactly known for its Folk Metal scene, and the large amount of bands that do emerge are quickly overshadowed by the large mass of music within the genre. ‘Claim the Throne’ is one of those bands that is trying hard to get there with the release of ‘Aletales’. Aletales is the second release by this Australian quintet. The first release was the full-length album ‘Only the brave Return’ which is based on a book written by the band. With the EP Aletales, the warriors of Claim the Throne are continuing their Folk metal tradition. Time to sit down an listen!

The album starts off with the short intro ‘Plundersaga’ that almost results unnoticed in the second track of the album ‘Of Mead & Weed’. With song titles such as this, we know what kind of music to expect. The third track of the album, ‘Set Sail on Ale’ feels like the real opener of the EP, because its predecessors were relatively short. The song is very catchy, up-tempo and the folk influence can mostly be heard in the accordion. The guitar work is solid, and there is very little to criticize about the mix. At times the music and the vocals remind me of the early work of Korpiklaani.
‘Fable from an Oaken Table’ starts off very exciting, and performs well with the pace of the previous track. With 3:27 minutes it is officially the longest track of the album, and is slowly drifting towards the climax of the EP. The final song ‘Two Pints of Honey & A Barrel full of Beer’ is entirely acoustic and feels like a song to sing around the campfire. A very nice end to a relatively short EP.

Although the EP has a tracklist of five songs the running time is no more than twelve minutes long. Enough to convince? Sure, but the songs sound unfinished here and there, and sometimes messily flow into one another. Whenever the album works towards a climax, a new song kicks in. Pity, but then again the album is an EP so it’s still to be seen whether or not the songs will be recorded on the next album. Nevertheless I am curious what Claim the Throne has in store for us. Despite the short running time, this has become quite a decent EP.