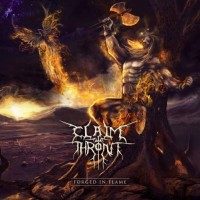 ‘The leading warriors of Australian Battle Metal’, this is how the members of the Australian band Claim the Throne call themselves. Actually this title doesn’t do justice to the great musical diversity that is reflected on their albums, for battle metal doesn’t cover the gigantic load of musical influences. With ‘Forged in Fire’ the band releases its third full-length album. After the release of ‘Triumph and Beyond’ the album took some time, but it was worth the wait, because these gentlemen have delivered a high-quality piece of art.

As mentioned before, Claim the Throne is not easy to categorize. Although Folk/Viking metal has the absolute upper hand on the album, countless other influences can be recognized on the album as well. After the epic intro ‘Ravagelands’ the raw violence explodes in the second track ‘The World Grows Dull’, in which we are being treated to a delicious piece of folk-metal that does justice to the name battle metal. Turisas eat your heart out! The next song ‘A Grand Destruction’ effortlessly takes over this theme, and every now and then the music is interspersed with wonderful keyboard solos that are close to classical music. The fourth song on the album ‘Zephyrus” is wonderfully catchy and up-tempo. The guitar violence alternating with the blunt grunts and angelic female vocals make a wonderful transition to the next tracks. In the song ‘Forged in Flames’ we hear influences that tend to go towards melodic death and black metal, while ‘At the Ocean’s Edge’ is a beautiful acoustic ballad, which again is supported by beautiful piano parts, and makes a jump towards a more ‘folky’ sound somewhere halfway through the song. The song ‘Gloryfeast’ takes us back to the beginning of the album and flows into the beautiful song ‘Darkened Suns Collide’ which also features the beautiful clean female vocals and piano parts. ‘In Blood be Sworn’, the song with a grand duration of 11:30 minutes has a great structure with solid guitar work alternating with acoustic intervals, and is obviously guiding us towards the last track of the album. The last song ‘Chronicle’ is a classic tinted piano piece that closes the album beautifully. I immediately want to put the album on repeat and start listening all over again.

I could keep talking about it forever, but Claim the Throne has delivered a great album with Forged in Fire. The album is incredibly diverse and doesn’t bore you for a moment. Although the guitar work may be a little one-sided every now and then this does not ruin the fun. The songs are very catchy and will be stuck in your head after just one listen. This record is clear evidence of quality over quantity. Don’t let this album pass you by, listen!