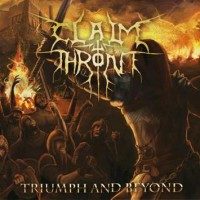 As usual, the album opens with a short intro. “Conquer, Trounce, Vanquish ‘sets the tone for the next song on the album ‘They Shall Live On” where the guitar and drum violence bursts. Very strong opening! This intro leads us to the third song on the album ‘Through the Rage of The Storm “that runs down to a more leisurely pace. The transition between songs is really great and the various tracks seem to melt together seamlessly. In the song ‘Mystical Hermit Of The Woods’ we hear more of the promised folk influences in the form of a Jew’s harp (mouth harp) and acoustic guitar. A fine alternation which then leads to more guitar violence on the following tracks. ‘The Thousand Thunders’ and’ Triumph And Beyond “remain faithful to the tone that was set by the first few songs of the album and proceed with the guitar violence and blunt grunts from before. Traditionally, the band treats us to a beautiful acoustic ballad with ‘The Lake’. The double vocals in this song are beautiful and the somewhat husky “clean” vocals of the vocalist are a good addition to this track. In the song “Rat Infested Hut ‘the keys once again gain the upper hand, something I am always very happy about when this band is concerned, because the keys are beautiful and pure time and time again.
Those who have listened to the EP Aletales are undoubtedly familiar with the next song of the album. ‘Two Pints Of Honey And A Barrel Full of Beer’ has managed to make its debut on the album, but not in the acoustic version as we know it. On the contrary, the track has been transformed into a hard metal version that would make your head spin if you would try to bang your head to the pace. “The Sermon” is a completely instrumental track and creates a nice interval on the album that slowly goes towards its climax. “Words Of The Great Oak ‘is added to the album as a bonus track and with its 9:50 minutes it is a long but varied track. The album closes with a well-known track of the EP Aletales, “Set Sail On Ale. This song has undergone the necessary changes and is transformed into an upbeat acoustic version in which we hear the beautiful female vocals again. The perfect ending to a great album!

Perhaps I am a little biased when Claim the Throne is concerned, but there is little wrong that this band can do in my experience. They deliver quality time after time, and although the genre is somewhat exploited the Australians continue to be original. This album should not pass you by, turn up your music and time to bang your head!