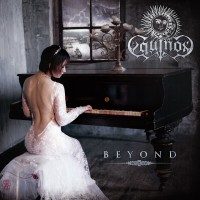 Once upon a time, there was this great Russian band called Beer Bear. Their latest records was called ‘The invisible line’, but the line drawn in their record, wasn’t that invisible. The change they like to make from happy beer folk-metal wasn’t easy. They did a fine job that’s for sure as you can read in our review of that album we wrote back then. But it almost seemed an impossible mix and the band wanted to travel further down the path of more serious and darker folk-metal. Eventually they broke up, but they re-incarnated and released an EP to underline their style. And no wonder, this sounds rather familiar. This EP is called beyond and the main track of this album is ‘Beyond the Invisible line’. This seems another statement of the band named Equinox these days, they like to further down this line.
The main change in the song is the change of language. They song doesn’t differ from the song of the latest Beer Bear album, but has English lyrics. But this isn’t an overall change in their style, because the second track, an Iron Maiden cover, has Russian lyrics. The style is a nice rather quiet kind of dark folk-metal with still the nice male and female vocals and the use of nice authentic instruments like violins.
Equinox marks the change of style, the change into darkness, a change to keep an eye out for, a change to be amazed by and a change to enjoy.