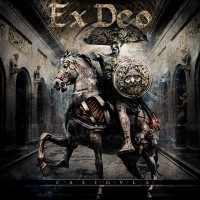 Those familiar with the name Maurizio Iacono will undoubtedly think of the death metal band Kataklysm. What many people know now is that the five members of Kataklysm, together with François Mongrain and Jonathan LeDuc, have released their debut album Romulus under the name Ex Deo in 2009. Three years later, these gentlemen hit back hard with a beast of an album.

Long and fierce was the discussion whether or not Ex Deo belonged to the website of folk-metal.nl. But now that these gentlemen have made their debut on the website it’s a good time to take a closer look at this wonderful Roman-tinged album. Caligvla is deliciously raw, bombastic and overwhelming from the very first notes. The album kicks off with the eponymous song ‘I, Caligvla’ that instantly makes me feel like I am in Roman spheres. After a short intro that is best described as epic the raw violence explodes when Iacono opens his mouth. What follows is a stunning combination of screeching guitars, blunt grunts and symphonic elements. The violence of the first song is then perfectly conveyed to the second song on the album, “The Tiberius Cliff” and the third song “Per Oculus Aquila” in which we get to hear more of Maurizio’s screams that we know from the debut album Romulus. These are a lot less prominent on the new album and in combination with the blunt grunts make Caligvla a lot more varied than its predecessor.

Now arrived at the fourth song of the album ‘Divide et Impera’ in which we are surprised by female guest vocals, I am convinced that there is little wrong with this second album by Ex Deo. On the whole the album is a lot more bombastic and melodic than its predecessor and the overall structure seems a lot more logical. Although ancient Rome prevails throughout the entire album, the songs are in no way close to each other in terms of theme. Where the first song of the album is a clear tribute to the notorious Roman emperor Caligula, the song ‘Along the Appian way’ tells the story of Marcus Licinius Crassus who crushed the rebel army of the Roman slave Spartacus. The changing themes however, do not affect the transition between the songs, which in this case seem to fit perfectly.

Caligvla is an orchestral masterpiece that rushes over you like a savage horde. The symphonic elements that predominate on this second album, as well as the way in which Maurizio calls out to his troops make you believe that you are standing among the legions on the Roman battlefield. This album is an absolute must for people who do not shy away from a bit of musical violence. In short, worth a listen!