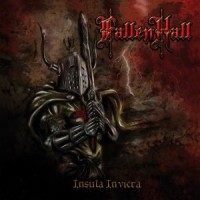 ‘Epic power metal from the Canary Islands, that must surely be worth a listen’ was my first thought on the album ‘Insula Invicta’ by the Spanish band Fallenhall. The band released a demo in 2010 and now releases its first full-length album with Insula Invicta in 2013. The symphonic elements are strongly represented on the album, and in addition to the clean vocals of singer Juan Monzon we are treated to a fine game of overly operatic vocals from singer Mab Ortiz. Unfortunately these vocals regularly miss the mark.

It is no secret that I am not fond of female vocals that are completely out of tune, on the contrary. I’m not a big fan of the genre, but when female vocals are so impure that it is starting to hurt your ears you know that something is going horribly wrong. Besides the fact that the mix sounds horrible the vocals ruin more than they make up for. Especially during the last song on the album ‘Under the Shadow of The Black Sun’ I am incredibly annoyed by the poor quality. Too bad, because even though Monzon’s vocals are far from being perfect I am still able to enjoy them to a certain degree. The band is moving towards a certain direction but doesn’t quite reach the point, which can be heard in the vocals as well. The promised symphonic elements are abundant and the solid guitar work is greatly assisted by the keys that are over the top as befits an epic power metal band. Although the album sounds very messy and standard on the whole, the album is still pretty decent.

As stated before, the band should really focus on the mix because it is absolutely worthless to say the least. Where the album should sound epic throughout the symphonic elements it is often just that little but too much that makes it sounds irritating. This is mainly due to the keys that really dominate on the entire album.

The band certainly has potential but delivers a mediocre album with Insula Invicta. It is too bad that the female vocals completely ruin it, because this album could offer a lot more. Especially at the beginning of the album it seemed to go in the right direction and the polyphonic parts sounded pretty good. Less high pitched vocals and more second vocals might solve this problem. Perhaps I am prejudiced when female vocals are concerned, but I think you don’t disagree when I say this album is nothing special.