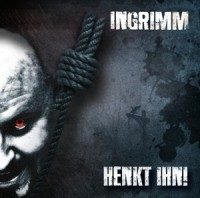 German Mittelalterrock, that’s something we know, for sure! While most people don’t know more bands than for example Subway to Sally or In Extremo, there are many, many more bands in this crowded subgenre of the folkrock/metal. Ingrimm is one of them, and releases with ‘Hengt Ihn’ their fourth studioalbum.
Everybody has some kind of idea what the music sounds like when they hear the term ‘Mittelalterrock’. However, Ingrimm is a bit different, because Ingrimm tends to be a lot harsher than the great bands from the genre like In Extremo or Saltatio Mortis. The band sounds a bit more ‘metal’, with sometimes teven Thrashy influences, and the vocals doesn’t sound so ‘pinched’ as the other bands I just mentioned.
The music, that’s a bit in between hardrock and metal, is completed by the various traditional medieval instruments like a hurdy-gurdy and a violin. Especially the pieces played by the hurdy-gurdy, which are often used as the intro of a song, remind me a lot of a mixture between Faun and Eluveitie. These influences don’t return anywhere else in the music, it’s just the hurdy-gurdy that keeps reminding me of those bands.
This record became more than decent. However, it’s too bad that there aren’t any songs that really stand out. Everything just passes along nicely, but as soon as you’ve listened to it, you immediately forgot what you’re listening to. Decent, but nothing more than that.