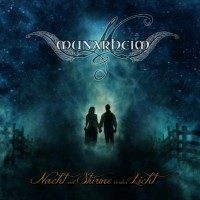 In 2013 we already got a slight hint of Munarheims capabilities with the EP ‘Liberté’. Now it’s finally time for the first full-length of this German band which got, besides the beautiful artwork, the title ‘Nacht und Stürme werden Licht’.
First things first. Munarheim released with ‘Nacht und Stürme werden Licht’ probably the best debut of 2014. Maybe it’s still too early to tell, but this album is great, really great.
The intro sets the mood. Expecting, slightly mysterious, this intro sets the right atmosphere for the rest of Munarheim’s music. Slowly but steadily the intro sounds lovelier, greater, until it almost sounds like a soundtrack for a movie. After this is finished, seamlessly the acoustic intro of the song ‘Liberté’ is played, before the great bombastic sounds blast through my speakers. This is pagan/folkmetal as it should be! The vocals sound venomous, but are entangled by the epicness of the music, which make the music a little more accessible.
The tempo throughout the album is almost all the time perfect for headbanging. Exceptions are the three quitter intermezzo’s called ‘Mein Geist am Bächlein ruht’, ‘Lichtung’ and ‘Träumerei’. The sound is at the same time grand and vivacious, but also modest. The music switches from peaceful acoustic passages to parts that almost sound like pure black-metal. So there’s at least enough variation! This band clearly has his own style, which, if I needed to compare it, sounds a bit like a mix between Finsterforst and Wintersun.
That the band doesn’t take them all serious is shown through a cover. The band didn’t choose to cover just a metalsong, no, not even a popsong. The band chose for the themesong from ‘the last unicorn’, a children’s movie which is, so I’ve heard, really popular in Germany.
‘Nacht und Stürme werden Licht’ has become a wonderful debut. I can recommend everybody to listen to these ‘newcomers’. There’s just one question left… When will they be playing an European tour?