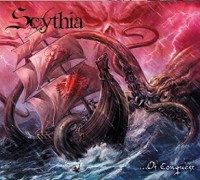 … of Conquest, the third album of these Canadians. Clearly these men are working hard on new material. Heavy metal with Powermetal sailing the seas of Folk-metal.

Fanfare 1516, another album hosting sails in the year 1516. A long intro grows into the real fanfare, immediately you hear the powermetal influences. It’s still as catchy as we were used to from these warriors. The “Merchant of Sin” is the next song, more and more Powermetal gets to the frontline of the sound we hear. After you’ve heard it once, it’s easily stuck in your head and you’ll find yourself singing this song while doing the household. Still Scythia is a band in the folk-metal scene, so this means there is time for a drinking song, “Bear Claw Tavern”. Not much special about this song but it’s definitely a song to party on, even some grunts can be found here. Scythia as well made a videoclip of this song. Than it’s time for Sailor’s Accolade, the only song on this record you can as well find on an earlier release.
The cd gets some more excitement once we get to the “Rise of the Kraken”, until now it’s all nice and clean. Even here I find it somewhat hold back.
Land of Scythia, a song starting like it comes from The Hobbit, fortunately for us, this changes once the song gets of. But in the end it’s very tame.
It takes a while but with “Departure” the waters start to boil again for this band. Honestly a great song, but it can’t change that I find the whole quite tame and neat.

Conclusion, the folky shawm makes place for powermetal alike keyboards and the whole sounds pretty gentle. I actually hoped that Scythia, who had from …of Exile towards For the Bear a more rough course with a lot of folky melody, would continue in this direction. Yet The Army of the Bear sets sails for a more powermetal minded way, which is to nice and gentle for me.