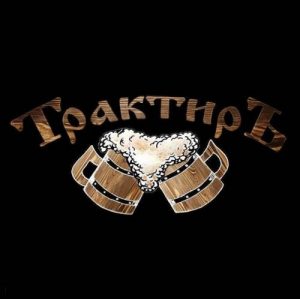 It is definitely a misconception that bands cannot deliver good quality with their debut album. Of course it is always difficult to set a standard the first time, and a certain degree of quality is expected from many seasoned bands, but amongst all the starting bands a lot of quality can be found. This is also the case with the album ‘Nalivaj’ by the Belorussian band Traktir. The band was established in 2008 and now delivers their debut album Nalivaj. These fairly young gentlemen make ‘beer-folk metal’ according to their own words, and deliver a pretty decent album with Nalivaj.

After a few minutes it already becomes clear that we are not dealing with a band that is trying to sound ‘folk’ by adding some flute, violin or other folk instruments. On the contrary, no trace of such instruments can be found on the entire album. Throughout the album, the rousing guitars are assisted by the keys that seem to predominate on the album. A little basis perhaps, but these gentlemen seem to get away with it just fine. When the second track of the album starts I vaguely have to think about Gwydion and at times about Metsatöll with slightly higher party content. Although I am not about to venture into Russian lyrics and have absolutely no idea what the songs are about one thing quickly becomes clear; Traktir is here to start a party and they do it damn well! The music is deliciously rousing and would do well on a small folk(metal) festival such as Hörnerfest. The high party content is being emphasized by the sound of a beer can being opened, and a bird whistle somewhere halfway through the album that puts a big smile on my face. These jokes make the album very diverse and listenable, and although I would not describe any of the songs as a highlight the album definitely scores above average. The solid guitar work alternates with cheerful tunes, Russian bluster and Polka influences, something that can only make you feel happy in this case.

May one thing be clear, Traktir is music that makes you very cheerful and is easy to listen to. I am curious how the band performs live because the album sounds promising! It may be a little basic here and there but the album has enough catchy tunes to the songs to forget all about this. This is definitely not a bad start for a first album and I am curious which direction the band will go next. One thing is certain; these gentlemen are guarantee for a party! Music on full volume and time to bang your head!