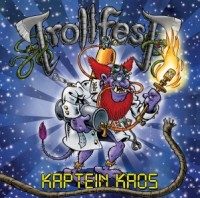 Madness. Pure and utter madness. This can only concern one band of course, and that’s Trollfest! This band, which already from their founding was doing whatever they feel like, is back with their 6th full-length.
Where the previous album dealt mainly with bees, Kaptein Kaos focuses on an investigator who invented a time-machine. Sounds crazy? True, but we’re talking about Trollfest remember?
Musically speaking this album is another mix of different influences. From samba to jazz, everything is integrated smoothly within the music of these trolls. To name all different influences implemented in the music would be too much work, but believe me, this is more than ‘just metal’. The sound is just one big chaos, but in a structured way. One way or another, the band found a way to implement many ideas in just one song and to sound really energetic, without losing the overall feel of the song. The first time you’re listening to this album could be a little bit overwhelming, but soon enough it becomes clear how well all the songs are written.
In comparison with the previous albums, this album has more different angles, and the songs differ much more than before. However, Trollfest managed to make this utter chaos listenable, which makes it, besides just chaotic, also really great to listen to. The rock-solid production could be a reason for this.
Trollfest. They just keep on doing whatever they feel like, without worrying about anyone or anything else. However, there’s no reason why they wouldn’t do just that. The band plays energetic, and shows that, even after 5 full-lenghts, they can still surprise. The recipe is familiar, though the ingredients are different, and that ensures that you’ll smile every time one of these songs are pounding through your speakers. This one’s a definite recommendation to all of you!