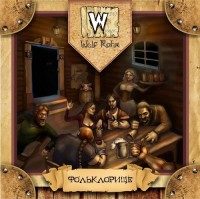 Wolf Rahm’s search for a label failed and that’s why they decided to release their album themselves at the Russian social media VKontakte. But who failed here? Surely the labels which didn’t sign this band. So, the band was fortunate at last and their album is released by Sound Age Productions.
Fake Folk Metal from Russia. Well there’s nothing fake about this, the only fake sound in this is are the keys, sometimes funny with their accordion sound, but on other moments a bit annoying. When you’re not looking for another subgenre you can call this beer-folk-metal, a nice phrase which says it all. The only thing is, the lyrics have a low percentage of alcohol.
The lyrics are about women, fight and more and of course done in Russian, with one exception. The sixth track is Drei Männer, which is of course in German. And they’re tales told at the bar after a couple of beers.
And maybe you don’t find the very best music at the bar, but it’s entertaining like always. Don’t expect some great new ideas from Wolf Rahm, but what you can expect is a lot of nice songs which put a smile on your face. They’re consumed best in the neighborhood of some friends with a nice amount of alcohol.