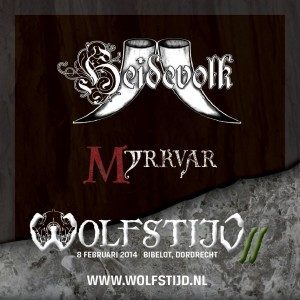 Do we still remember? At the start of 2012, the first edition of Wolfstijd took place. A festival that offered a stage to several folk, black and powermetalbands. After we didn’t hear from them for a while, suddenly there was the announcement of Wolfstijd II. 6 bands, 2 of each sub-genre, on a one day festival. Where the first edition took place in the Kroepoekfabriek in Vlaardingen, this time the festival took place in the Bibelot in Dordrecht.
The location was great. A pretty small, cosy concert hall with a nice sound. In the lobby there was a metal-market, where you could shop for shirts, jewellery and records if you ever got tired of the heavy music.
Eventually, it was 4 o’clock, and thus time for the first band of the day.

Mondvolland
And what a start! Mondvolland, the first of the two blackmetalbands, started off with an incredible set. Dutch, brutal, but at the same time with a great sense of melody. Vocalist Mickael, who we might know from the time as a replacement at Heidevolk, looked much more comfortable playing with ‘his own’ Mondvolland. From icy black metal screams to clean vocals, this guy could do anything. Also, the rest of the band members were on fire and played a tight set.
The venue was crowded from the moment the festival started. Other people in the audience could appreciate Mondvolland as well, this was visible because the first people started headbanging. A great start of the festival, setting the mood for the rest of the day.
Score: 8/10

Methusalem
The contrast couldn’t be bigger. The icy blackmetal of Mondvolland was just finished, and Methusalem already entered the stage. Powermetal like we’re used to. High pitched vocals, epic guitar solos and incredibly catchy, you know what I mean! While they didn’t play entirely in sync at the start of the set, it was clearly visible that the band was enjoying it.
However, the energy didn’t really skip to the audience. Maybe because the contrast between the previous band Mondvolland was too big? Because the songs sounded quite alike after a while, we took a break from the music and started to look for something to eat.
Score: 6/10

And that was something that was arranged really well at Wolfstijd. Opposite of the venue there was a snack bar where you could get the so called ‘Wolvenmaal’ (Wolves meal). French fries and two snacks for just 5 euros, more festivals should do this! After we finished our meals, it was time for the first folk-metalband of the evening; Myrkvar.

Myrkvar
Myrkvar was, like said, the first folk-metalband of the evening. The band was clearly in best spirits, and was almost dancing on stage. The fact the vocalist/keyboardplayer Hrabnilaz traded his standing keyboard for a keytar resulted in an even more dynamic show.
The energy clearly transferred to the audience. The first conga-line was a fact, and the headbangers showed their appreciation through continuous headbanging. Great show!
Score: 7/10

Saille
Three bands done, still three to go. This meant that it was time for some black-metal again! This time, it was the Flemish Saille that entered the stage. Melodic, harsh blackmetal. Ideal for headbanging, something that most of the people did.
The band played spot on, and the sound was close to perfect. The band, however, did have a surprise for us. After a few songs, a violin player entered the stage, to play with Saille for the rest of the show. Black metal and violin, it proved to be an amazing combination. The songs became slightly more melodic, and, while the music kept its sharp edges, the beauty hidden within the songs was revealed.
While I didn’t know the band beforehand, I must say that this was a great discovery. I can recommend anybody to see this band live!
Score: 8,5/10

Steelpreacher
After the mighty performance of Saille, we got back to powermetal. This time it was the German Steelpreacher who got to show what they’ve got. Powermetal isn’t exactly the right description for the music of this trio. The band played wonderful old-school hardrock / heavy metal, like we know from the eighties. Really straightforward, in a good way, with songs you could sing along even before the song finished. Lovely feelgood band, who know how to throw a party with their energetic stage performance.
Score: 7,5/10

Heidevolk
After steelpreacher, it was time for the last and final band of the evening; Heidevolk. A performance that will always be remembered as the first gig of the new vocalist Lars. And let’s be honest; Lars is a great new vocalist for Heidevolk. Although the vocals were a bit too soft in the mix, you could clearly see that Lars (just like the other members of the band) really enjoyed himself.
The band played a great set, with a setlist which was different than we’re used to from Heidevolk. ‘Einde der Zege’, ‘Dondergod’ and ‘Opstand der Bataven’ were played; songs that I haven’t heard live in a while. A varied set, with a slight emphasis on the harsher and faster songs.
The audience didn’t matter, they liked everything Heidevolk played. People were moshpitting, headbanging, and of course, singing along loudly. A worthy headliner for a great festival.
Score: 8,5/10

Wolfstijd can look back on a great second edition of the festival. The combination of power, folk and black worked fine and ensured enough variation throughout the day. Now we can just hope that we don’t have to wait that long for the next edition!