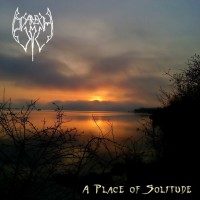 The thing I’m always a little scared of when black metal is concerned is that it will probably be another one of ‘those bands’ of which we already know thousand of a dozen. I was pretty prejudiced when I started listening to ‘A Place of Solitude’, the solo project of Yarek Ovich from the Ukrainian Viking metal band Miellnir. I had to put my prejudices aside however, for what was waiting for me went far beyond my expectations.

The first few notes of the album already pique my interest, and I am surprised with a beautiful piano intro in ‘Don’t release my hand’. The melodies should not be described as eminently black, because they are melodic and ‘warm’ and at times remind me of the early work from bands such as Moonsorrow and Alcest, something that fits right up my alley in this case. However, what starts out as a beautiful atmospheric song that creates a wonderful atmosphere is then completely devastated by the vocals. The vocals cannot be described other than cold and empty, and although many black metal bands get away with this, this is definitely not a plus for Yarek Ovich.
Hesitantly I reach the second track of the album, ‘Places of Solitude’, where I am treated to another beautiful intro in which the guitars are supported by a quit and sad violin, simply wonderful! But unfortunately this song also has to suffer the black metal screams. The piano solo halfway through the song is supported by the violin and makes up for this, and for a moment leave me completely absorbed in the music. However, this is short-lived and I fear that my earlier suspicions will be confirmed.
Now arrived at the third track of the album, ‘I shall not return’, I actually do not dare to hope that the vocals will get better, and unfortunately this is confirmed again after a few seconds. In my opinion, however, the folk influences that can be heard in almost every song are a big plus, and create a wonderful dreamy atmosphere.
The fourth and final song on the album make me feel like I am listening to Alcest and create a beautiful atmosphere through the nice clean guitar intro and warm piano parts. While I can be absorbed into the music of the instrumental version of the album, the poor quality of the vocals annoy me song after song in this case.

Although the mix of the vocals could be much better in comparison to the music I have to say that ‘A Place of Solitude’ is not bad for a first EP. The album creates a wonderful sad atmosphere that I am so fond of in bands such as Moonsorrow. The melodies make up for a big part of the album, but the vocals really affect my final judgement. I also think that the drums are a little too prominent at times. For those of you who are into depressive atmospheric black metal this is definitely worth a listen. For me, however, that’s all it will be.