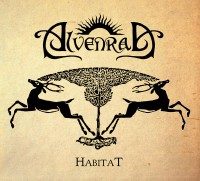 The Dutch language is a sensitive subject. Most of the times, music that’s sang in Dutch isn’t really my cup of tea. There are just a few bands out there which can convert our strange, terrible-sounding language into something that’s beautiful or epic. Heidevolk is a great example of a band that can make this work. Right now there’s another band, called Alvenrad, which also sings in the Dutch Language.
Okay, let me start about the music first. The album starts with the song called ‘Woudakoestiek’, already from the start a really powerful song. A nice heavy/powermetalgroove which keeps on going throughout the song. Ideal for headbanging! While the whole album is pretty much guitar-orientated, there are also some traditional instruments interwoven within the music. The band isn’t afraid to use influences from different genres like some black-metal, here and there some power and once in a while just straightforward folk-metal. Musically speaking this album is diverse and pretty good.
This brings us to the next thing to discuss, the vocals. The lyrics are, as said, in Dutch and of an exceptional level, great compliments to that! The only problem is that the clean vocals are sung in the most ridiculous accent I’ve ever heard. An accent that sounds something like someone from The Hague (if you don’t know it, be happy, it’s one of the worst accents in Dutch language, I can assure you!), and that is so strongly present that I can’t even take the beautiful lyrics seriously anymore. It seems more often than not that the accent is being forced, which makes the overall sound even more ridicule.
Alvenrad released with Habitat a mighty fine record, musically speaking then. However, the band made the mistake to work with a forced, strongly present accent, which is a shame. I hope, and think, that foreigners aren’t too bothered by this however. If you don’t come from the Netherlands, or aren’t you bothered by someone’s accent? Then definitely listen to this, because it certainly has potential!