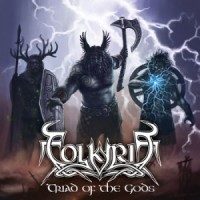 Folkyria is a rather new band, formed in 2012. But they decided it’s time to let the world know what they’re up to, so they released an EP ‘Triad of the Gods’.
How do you make Folkyria? Take a large amount of Ex Deo, and a big slice Amon Amarth, add some Eluveitie and a little bit of old Turisas. Put this in a blender for or better, mash it with a fork, so we can taste the big chunks of each ingredient afterwards. And there it is!
Is this something completely new? No. Is it tasty? Yes, it is!
It’s quite amazing how such a young band can make these nice songs. It’s not perfect, the keys are to prominent sometimes and the vocals sound a bit forced. But the compositions are nice, drums are nice and fierce, the guitars solid and quite catchy sometimes. And it’s often put away, but listen to ‘Wrath of Taranis’, yes another one with catchy guitar, and you hear a very nice bass too.

I won’t bother wasting more words on this nice album. If you’re fan the mentioned bands, just listen to this album yourself at their Bandcamp.