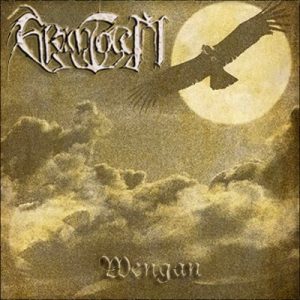 Grimtotem released a demo earlier, but that one was more a sample of what their were up to. It had poor quality of sound. But luckily they have managed to record something decent this time. It’s still a demo, and the quality of the recordings can be much better then we can hear on this one. Now we can finally check out this band from Chile.
Starting with an intro, containing thunder and nice strange instruments, I’m really very anxious to hear more of this album, because this intro is very original.
The second song Battle Of The Centuries is a song we already know, but the improvement of quality is so big, I can’t hardly recognize the song. The band is trying to get an vintage sound. Although the music is very different, the drums remind me of Sisters of Mercy. The drummachine used by the Sisters of Mercy had this sharp too. I can’t say it’s unpleasant, but I don’t get used to it either.
Küruf is another brilliant small piece, and this makes me excited again, but instead of building a song on this piece. We get a totally different song Kuralaba. Nothing special, nothing new and a bit of a disappointment. Straight forward pagan metal with fierce (female) metalvocals.
In Leftraru I, we can hear the love peaceful sounds of nature and the music in harmony with it, but we can hear things are changing and this leads us to Leftraru II, a fierce pagan metal track.
And the demo leaves me rather confused with the the track Nativa, where the music takes me back to their native land, with beautiful sounds and quiet music.

How to judge an demo like this. And I don’t mean the quality of sound and that stuff, that are things for the bands which have the luxury of a label. No, what to say about the music on this demo of Grimtotem. Most of the time on this demo is taken by rather standard pagan metal songs, with a bit of a vintage sound, something where Grimtotem is desiring for. This part of the demo is, as mentioned, rather standard, and it’s there where my interest is gone soon when I’m listening to it. But the track which trigger my attention are the intro and Küruf, Grimtotem shows they have great ideas, and I can only which they’ll find a way to blend these ideas into real songs. But who am I to interfere with the ideas of a band. But it leaves me with an unsatisfactory feeling, there’s more underneath I think.