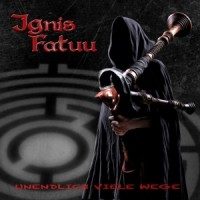 Ignis Fatuu is in my top 3 list of worst live performances EVER. After terrible shows performed at several German metal festivals I was completely fed up with this band. There is, however, one ‘problem’; the albums of these Germans are always pretty good.
And that’s exactly the reason why I’ve taken up the challenge to provide ‘Unendlich viele Wege’ of a review. This album is the most logical next step after the last album ‘Neue Ufer’ from 2011. While there were a few line-upchanges in the meantime, including a change of vocalists, it’s hardly noticeable on ‘Unendlich viele Wege’.
What can we expect from this album? Typical German folk-rock, made like many other bands in this genre. In comparison with the older albums, this one sounds a bit harsher, partly because the songs focus more on the guitar. Besides that, the lyrics are again from a standard that seems to say that ‘the more clichés, the merrier’, still there are bagpipes and whistles integrated within the music, and again there is a cliché ballad which is accompanied with fierce rocking and danceable tunes.
While Ignis Fatuu releases nothing that’s really special with this album, it’s still a pretty decent one. It’s clearly visible that the band wanted to play safe. Nothing spectacular, but nice anyway.