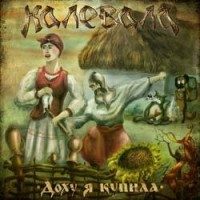 The Russian Folk-metallers of Kalevala don’t keep us waiting for ever. A year ago they released a full length and now they’re back with an EP ‘Dokhu ya Kupila’. An EP with four tracks, starting with ‘Ty Prosti Menya Rodnaya’, when I think of Russian music, this is what I think of. It would be a nice one to participate in the Eurovision songfestival. It’s nice, it’s folk, it’s Russian, not to loud, a song to show the world what folkrock is about.
And it isn’t a bad one, but the second track of this album is rather slow, and I’m beginning to miss the power Kalevala also has. They’re not the band of the screaming metal, but they have very nice, more solid songs, like we know from their video ‘Luchshuyu Spoyu Vam Pesnyu’. In these kind of songs I think they’re at their best, but we don’t get those kind of songs on this EP.
The title-track of this album is the only one which gets a little bit in this direction and I think that’s a shame.

I’m very fond of the Russian folk, but this EP is a little bit ‘to Russian’ for me. I think it will be appreciated most by Russians. This EP is more a follow-up of the ‘Osen’ v Stile Folk’ album, which was also leaning more on the pure folk and rock elements. I hope their next one will be more like ‘Luna I Grosh’. Dokhy ya Kupila isn’t a bad album at all, but it doesn’t appeal to me.