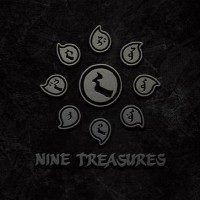 Before I started working for folk-metal.nl, of course I was a huge fan of folk metal, but I never imagined myself listening to Mongolian folk metal. I used to be one of those people thinking that folk metal could only come from Finland, Sweden or Norway. A couple of years later I know better and Nine treasures proves me again that it is a big misconception.
Nine treasures was founded in 2010, when the band first played together in Beijing. They released their début album, “Arvan ald guulin honshoor” in 2012. Now it’s time for me to listen to their second album “Nine treasures” which they released in 2013.
The intro of the album sounds hopeful. Right after that a cheerful, up tempo song starts. It reminds me a bit of Korpiklaani. This song is interesting and makes me wonder what else this album will bring me. The rest of the album are 35 minutes of accessible and easy to listen to songs with great folk influences. Nine treasures uses the Morin Khuur (a traditional Mongolian bowed stringed instrument) and the balalaika. Together with some nice drums, guitars and a little bit of strange vocals, you have Nine treasures. I can’t say the music sounds really new or improving. But on the other hand it is, because I’ve never heard any Mongolian band before.
What is striking to me is the good quality of this album and the way the band is able to transfer their ethnic Mongolian culture and spirit through the music. You can hear they are proud of their background.
I think the album is more folk than metal. This album could be a bit too soft for you, if you are more in to the heavy metal stuff. But, if you like joyful and energetic folk rock music you should really listen to this album!