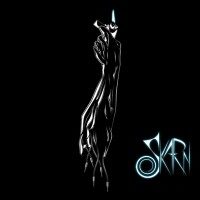 The debut EP of Skarn, a French folkloristic metalband contains four tracks. These four tracks are dripping of Breton folklore. These guys don’t make the regular folk-metal with screaming voices and fierce guitars. No, their music is more like bands like Folkstone, In Extremo and Saltatio Mortis. The bagpipe and Breton folk-melodies play a huge role in their music. There aren’t too many of these kind of bands an while they stick, like folkstone, closely to the local folklore, they make an unique brand of of music. The Medieval tunes are obvious, but they’re all in the Breton perspective, the way the local people of this are kept them alive for ages. Skarn doesn’t only keep this tunes alive, they upgraded them with bass, drums and guitar to modern-life music.
The recordings aren’t optimal, but they kept it from becoming a mess. The instruments can all be heard clearly, it almost sounds like it’s all recorded live, in one take. But this doesn’t make it less pleasant to listen to this album. And while they don’t sing in French but in Breton, we won’t ask for an ‘encore’. No we don’t ask, we shout: We want more!