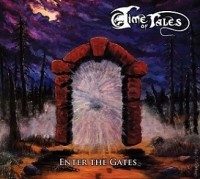 Time of Tales have released their debut-album after many years of difficulties with their line-up. The band is stable now and so they’re ready to Enter the Gates!
When you start listening to these Polish Folk-metallers, you notice the influence of Eluveitie at once. The Celtic folk tunes by whistle and flute gives the catchy music a nice bright folksound. What’s very delicious about their music is the fact the folk isn’t a small add to their music. No, not at all, where the solid guitar, bass and drum lay down this nice layer of good rather catchy tracks. The flutes and whistle are omnipresent to put their mark on the music.
They put four nice tracks on this album, maybe not all songs are brilliant, but they make this up, with a lot of ‘catchynes’ like in Liar for instance. A song I got a little bored with when I had listened to it a few times, but which would be good for some raging madness when they play it live.

Time of tales is over, they can pass the gates, with this album the band has become reality. This is good shit and I would love to see them live once!