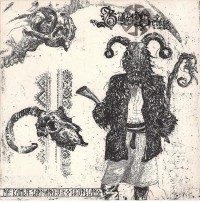 Zakon Velesa released a demo in 2013. Zakon Velesa exist of two members, which are responsible for the music and the lyrics. To perform live, they have a couple of ‘live-musicians’. There are not much recordings of a nice quality of this band and their demo isn’t going to add a much better one to this list. The demo seems to be recorded under a thick blanket, but sometimes we need to see through this, because a lot of starting bands simply don’t have the money to do the recordings properly. And a demo is just a thing to demonstrate what you’re up to.
Zakon Velesa is a lot of black metal, with some folk influences which are mainly created with the keys. Personally I’m not fond of the kind of metalscreams in Zakon Velesa. This makes it very difficult to judge this music. I like the sound of the keys, because they give the music a little bit of a happy sound. The guitars, bass, drums and vocals give Zakon Velesa a grim and bitter sound. I expect the muted sounds isn’t a part of their style, but due to bad recordings.
This music isn’t something for the fans of folk-elements in the music, it will appeal more to the fans of pagan black metal bands like Kroda.