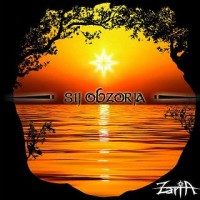 Almost a year ago Zaria released their first album, this EP is called Sij obzorja. They like to make something different. Does the band achieve their goal? Yes and no, of course there aren’t a lot of folk-metal bands in Slovenia, so they’re quite unique there. From a global point of view it isn’t really unique. It’s not the regular folk-metal either. They combine classical female voices, with rather clean music, a blend which we don’t hear very often. The guitars are solid, but there are no touches of rough death or trash-metal. They keep it all ‘between the lines’. The use of flute in Zaria is a nice personal touch, I haven’t heard this a lot in other bands.
There’s nothing wrong with the four tracks on this EP. The compositions are OK, there’s enough variation in the tracks too keep listening. It can use a bit more ‘spice’ here and there, but that’s my taste.

Zaria made a very nice début with this EP ‘Sij obzorja’, some of the folk-metalfans will thinks is all to neat, but the lovers of bands like Fenrir and An Norvys should give Zaria a try. The band is surely worth it.