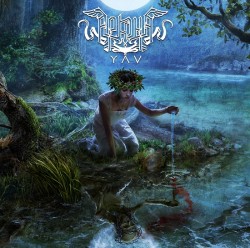 It has been a while since Arkona has released a new studio album. In 2011 the band released ‘Slovo’, shortly followed by a pair of live cd’s called ‘A Decade of Glory’ in 2013. In 2014 it is finally time for another studio album from the Russian band. Despite the fact that the band already has a lot of studio releases the band manages to surprise with the release of every new album, without straying too far from the sound that makes Arkona special. This is also the case with the new album Yav.

For the seasoned Arkona fans Yav might not come as a surprise. Surely we all know that Arkona makes raw pagan metal besides the cheerful folk-sounds and polka influences, with many trips to genre’s such as black metal. Although the last couple of albums have mainly focused on the folk-side of the band, Yav puts the focus on the black metal influences. This makes the album sound a lot darker than its predecessors. Arkona however, knows how to make the typical Slavic sound stand out on every album, and the versatility of Masha’s voice is perfectly highlighted by this. Despite the fact that my Russian is a little rusty to say the least, the band knows how to tell a story through music time and time again. The compositions on the new album are simply wonderful and well contemplated, and besides the traditional folk instruments we can also hear a clear piano sound every now and then. These various influences and the previously mentioned versatility of the vocals can be heard especially in the song ‘Na Strazhe Novyh Iet’. The percussion in this song is truly amazing and shows us the typical Arkona sound next to the black metal-like sound. The album is in no way comparable to its predecessors. Arkona manages to surprise and stay original with the release of every album. The contrast between the relatively long songs and somewhat shorter songs create a sort of flow in the album, which makes it easy to listen to without getting uninteresting or boring. Between all the raw pagan metal violence there are also some slower intervals on the album, such as the song ‘Serbia’ in which the beautiful Russian chants and Masha’s clean vocals are the highlights, or the song ‘Gorod Snov’ that clearly expresses a lot of emotion through the music.

Yav is a diverse and powerful pagan metal masterpiece that exceeds all expectations about the band. Arkona manages to captivate with the release of every album, in a genre that makes it hard to stay original. The sound that is typical for Arkona however is clearly present on the album. With Yav the band might be releasing its finest album up to date. Don’t let this album pass you by, this might be one of the best pagan metal releases of the year!