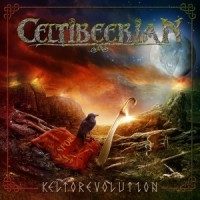 The statement that a great many bands within the genre of folk metal sound (somewhat) the same is probably no surprise. Many of these bands use a traditional folk instrument, which makes the music comparable to a great number of other bands within the genre. The first studio album ‘Tirikantam’ that was released by the Spanish band Celtibeerian in 2011 was stamped as a mix of folk instruments that lies directly between bands such as Eluveitie or Korpiklaani. In 2014 however, the bands releases its second studio album ‘Keltorevolution’ on which we can clearly hear that the band has developed a sound of their own.

Celtibeerian makes pure folk metal with lyrics that are mainly influenced by Celtic and Castilian tales and legends. The band uses a lot of traditional folk instruments such as violin, flutes, bagpipes and Jew harp, but knows how to create a sound of their own nevertheless. The vocals lie somewhere between clean vocals and grunts but are pleasant to listen to and make a perfect contrast with the music. The relatively short songs complement each other perfectly, which makes the album easy to listen to while creating a nice flow to the album. The album as a whole sounds a lot more logical and well contemplated than its predecessor Tirikantam because of this. The album also offers a great diversity between songs. The up-tempo songs are pleasantly alternated with ballads such as ‘Fields of Celtiberia’ in which the female vocals complement the music perfectly, or the cheerful drinking song ‘The Booze Song’. Songs such as ‘Win Another Battle’ are easy to sing along and are extremely danceable, making this a perfect song to play live. Besides the bands’ own sounds, there are many guest artists that have contributed to the album. The songs ‘Keltorevolution’ and ‘Blood of a Guiltless Town’ feature the female vocals of Patricia Téllez from the Spanish band Mörrighan, while her band mate David Garciá Sánchez takes credit for the lead vocals on the song ‘Eimos To Katum’. The earlier comparison with Korpiklaani is not entirely unjustified, because vocalist Jonne Järvelä and violinist Tuomas Ruonakari can be heard on the song ‘This Simple Life’. This song could have been a song from Korpiklaani itself. The folk instruments are being accompanied by snaring guitars and drum violence throughout the entire album, creating an up-tempo sound, which doesn’t bore you for a minute. This is definitely an album I will be listening to more often!

With Keltorevolution the band has taken an enormous leap forward, and has proven that they are able to create an original sound of their own in a genre that is so over-represented. The album has a nice flow to it, and is easy to listen to both in terms of playing time and variation between songs. There is only one point of criticism; why have I never been able to see this band live in the Netherlands?!