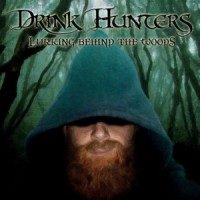 The debate about the question whether or not dialect and accent define the quality of music has been held many times at Folk-Metal.nl. Yet it remains a sensitive issue, which makes me question it many times. This is also the case regarding the Spanish band Drink Hunters. This band that was founded in Barcelona in 2008 and makes cheerful up-tempo Folk Punk or Celtic Punk Rock. Alongside an EP the band has released its first full-length album in 2011 under the name ‘With my crew’. In 2014 the band releases its second studio album called ‘Lurking Behind the Woods’.

As soon as the albums opens with the intro ‘Lurking Behind the Woods’ my neck hairs stand up because of the thick accent and poor pronunciation of the lyrics. Hesitantly I await the next track. Fortunately the pronunciation in the track ‘Speciecism’ is a lot better but far from perfect. What follows is a fair amount of up-tempo punk riffs combined with traditional folk instruments. This can mainly be heard in the song ‘Party at Paul’s House’ in the form of an accordion and tin whistles that make the whole sound incredibly cheerful. The absolute highlight of the album is undoubtedly ‘Speak More than a Fucking Politician’ in which the punk sound is perfectly combined with a banjo. A small detail that I cannot let go unnoticed is the way in which the lyrics don’t always seem to fit with the music, which makes it sounds illogical and chaotic at times. In terms of lyrics the band doesn’t do justice anyway, because with lyrics such as ‘Your mother is a fucking bitch’ or ‘Go out you fucking jerk’ I wonder if you should take yourself seriously as a musician. Nevertheless, the band seems to get away with it just fine.
In ‘The Big Fella’ the tin whistles are expressed very clearly and this track sounds just as cheerful as the rest of the album. The songs complement each other just fine, but show no real highlight whatsoever. The band is good at what she does, but does little in terms of originality, making them sound like so many other folk punk bands in the genre.
Meanwhile, about halfway through the album, everything starts to sound the same and my concentration as well as my interest slowly begin to recede. It’s a personal thing, but the accent of the vocalist is really starting to get on my nerves. When the last notes of the last song ‘Nasty Dictator’ are played, I am still reasonably happy with what I’ve heard.

Lurking Behind the Woods has become a pretty decent album for a second studio album. The songs are catchy and cheerful, but fall short when it comes to originality. Every song sounds the same and I wouldn’t want to describe it any other than mediocre. There is also the issue with the Spanish accent that I’m having a hard time ignoring. The band sure has potential, but the poor pronunciation, bad lyrics and large dose of mediocrity conclude that the band is unable to score higher than a 6,5.