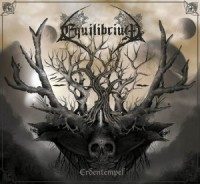 The German epic folk metal band Equilibrium has had quite some turbulent years. Shortly before the tour of the ‘Rekreatur’ album that was released in 2010, front man Helge Stang and drummer Manuel di Camillo left the band.
In order to finish the Rekreatur tour, front man Robert “Robse” Dahn and drummer Tuval “Hati” Rafaeli were added to the band, who haven’t left ever since. However, shortly before the release of the fourth studio album it was announced that bassist Sandra van Eldik-Völkl and her brother Andreas Völkl would leave the band. Therefore the three remaining members of the band, Robse, René and Hati, release the new album ‘Erdentempel’ together.

The new album kicks off with a typical Equilibrium intro; an epic and overwhelming omen that prepares us for the violence that awaits us on the rest of the album. The intro flows into the second song on the album called ‘Was Lange Währt’, which basically lies in the extension of the Rekreatur album. The typical Equilibrium sound is abound on the new album, which gives me the feeling that the songs sound very much the same. Those of you who are familiar with the EP ‘Waldschrein’ that was released in 2013 are undoubtedly familiar with the eponymous song that makes its debut on the new album. The whole sounds extremely cheerful, but like so many other Equilibrium songs, has this wonderfully epic overtone that I have come to love from the band. In contrast to the first couple of songs from the album, the song ‘Karawane’ sounds a lot grimmer and offers a nice alternation in relation to the rest of the album. However, I still get the feeling that I have heard this before in songs such as ‘Verbrennte Erde’ and ‘Verrat’. As expected, the album continues with incredibly happy ‘epic metal’ in ‘Uns’rer Flöten Klang’, which then makes a somewhat strange transition to the song ‘Freiflug’ which sounds a lot more quiet and emotional than the songs we have heard so far. The next song ‘Heavy Chill’ on the other hand, has a wonderfully melodic approach, which is alternated with keys that produce a marimba-like sound. This somewhat Caribbean sounding song is something we have heard before on the song ‘Die Affeninsel’. In completion to the rest of the album, the guys from Equilibrium decide to treat us to a healthy dose of humppa in the song ‘Wirtshaus Gaudi’, which is somewhat reminiscent of a metal version of an Oktoberfest song. Unfortunately, this song announces that the highlights of the album are over, because all the subsequent songs sound a lot like the previous songs on the album. Pity!

As a fourth studio album, Erdentempel has become an incredibly decent album. However, I must say that the songs are not as ‘exciting’ as they once were, which continuously gives me the urge to compare the new album to previous work from the band. The album is definitely not bad, and will surely delight new fans, but in order to appeal to the loyal Equilibrium fans the band will have to come up with something new. For those who are able to look past this however, Erdentempel has become a melodic album with great drums, screeching guitars, Robse’s wonderfully blunt grunts and varying songs. Definitely worth a listen!