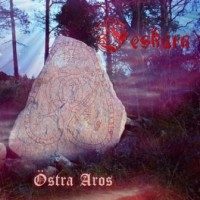 There are some bands who don’t know in which direction they should go. They simply don’t make a plan of how things should sound in the end.
It seemed for a while the Swedish Feskarn was one of them, but it turns out it’s a solo-project.

Östra Aros doesn’t have the coverart giving you a hint the band is in it’s first stage. This is already Feskarn’s second album, so it appears to be his style.
The songs on the album, no less then thirteen!, are so different they seem to be played by a couple of different bands. It all sounds a bit tinny and he uses sound-effects which do not pay a real contribution to the music.
When you listen more closely, there are good tracks behind this first appearance. A nice alternation between guitar and folk. You get this idea of original instruments, but the keys are just too obvious.
Winterland is a nice solid track, which reminds me of the deliciously low vocals of Svartsot.
Livet i Norden has something special in my opinion due to the atmosphere which is created here. This atmosphere is prolonged a bit in the title-track.

Feskarn is a solo-project from Sweden with potential. A shame Feskarn does so much stuff in a digital way, it’s a bit irritating.
I could be a very nice band, if the brains behind this project make it less digital and focus some more on the natural sound of the songs. And he should consider the use of ‘real’ instruments.