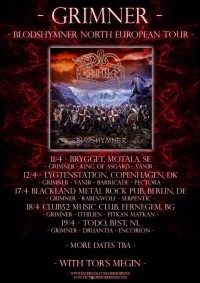 On Saturday evening the 19th of April I travel to Best to see the performance of Druantia, Encorion and Grimner. For a meagre five euros these bands can be seen live in the youth centre Todo. Plenty of reasons to get into the car and enjoy a nice evening with three great folk metal bands!

Druantia
The quintet from Brabant has the honour to start of the evening with a large dose of folk metal. The last time I saw the band live half of the band was ill and the sound was incredibly bad. Therefore my expectations are pretty high tonight! Although it is not very crowded in the venue the band knows how to get the audience along. Besides the bands’ own work a lot of classic covers such as ‘Trollhammaren’ by Finntroll and ‘Wooden Pints’ by Korpiklaani should not be missing in the set list. During the cover of ‘Wickie the Viking’ a small group op people even ‘rows’ along to the music. One point of criticism however is the fact that the sound is badly adjusted once again. Sporadically one of the instruments is being highlighted in such a way that it shrieks above all the other sounds, making it sound shrill. This is clearly the case with the flute that suddenly overrules everything else halfway through a song, and then disappears into the music just as easily. Also, the bass can hardly be heard during the first song and the vocals go from very soft to very loud. This doesn’t spoil the fun however. The vocals are once again very raw, the music is stimulating and cheerful and the quintet delivers a party time and time again!
Score: 7/10

Encorion
Encorion is the second band that plays tonight. It is the first time that I am (finally) able to admire the band live and I am extremely curious what awaits me tonight. The release of their second studio album ‘Our Pagan Hearts Reborn’ is something I remember as if it were yesterday, and it is an album that I still listen to regularly. From the first song the band knows how to capture my attention until the last note of the set. The sound is truly wonderful and the warm sound of the violin is perfectly adjusted to the other instruments. The band puts up a solid performance in which a lot of new songs are being alternated with songs from the first studio album. The small amount of audience in the room is headbanging diligently and moves along to the music. The forty-five minute set is over before I know it and leaves me with the thought that this might be the highlight of the evening.
Score: 9/10

Grimner
Grimner is the headliner of the evening and came all the way from Sweden to end the tour of their second studio album ‘Blodshymner’ in the Todo in Best. The audience seems to be looking forward to the show, because people sing along lustily from the first note and quite a number of fists rise up into the air. Deservedly so, because the guys from Grimner are guarantee for a party! Only once before have I had the pleasure of seeing the band live, but it is immediately noticeable that the band has grown quite a lot on stage. The music that Grimner makes is delightfully raw but also playful. This feeling is being emphasized by the flute that is prominent in the music. Because of this the whole sounds very cheerful and lively and is extremely danceable. People are headbanging and moshing fervently and here and there a couple of daredevils are crowd surfing in a fairly empty room. There is little to be said about the set of the Swedes. The guys from Grimner put up a good show with a nice contrast between old and new songs. A great ending to a successful evening!
Score: 9/10