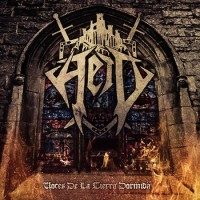 After a demo last year, Heid is now ready for the real work, a first real EP. The band was quite determined over the last years to create their own music and put a lot of efford in finding the right members. And once they did it was time to go to work.
The music is intense and heavy with very solid guitars and drums and above this all are rather fragile violin-melodies. The violin has such a nice contrast with the low and solid music. In the second track Golpejar they speed up a little and added some nice flutes. The nice contradiction between the authentic instruments and the rest of the music stays the same. This makes the album rather exiting.
The compositions are really nice and even when they get a little longer like in El Canto de los Responsos, they can hold you attention.

Heid isn’t the band which gives folk-metal a whole new meaning, but they make very nice and decent music. They definitely have their own style and sound, so with this band the Spanish peninsula has certainly become more interesting.