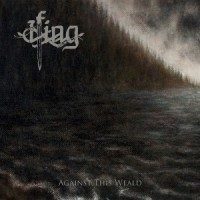 Two Guys in a band that want to use cinematic soundscapes in their Viking inspired blackmetal.
No, you can’t have prejudices about 1 or 2 men projects who do everything by themselves, especially not when they admit they want to add “cinematic soundscapes” to their music. In 2013 these Americans released their self named album “Ifing”, now we have “Against the Weald”.

“The sires beyond Await” is the first over 4 minutes long intro, a synthesizer trying to make an ambient “Viking” soundscape. Sure it sounds grim and mysterious and unless it’s completely nothing out of the ordinary, I’m getting kinda curious after the rest. Than after minutes long nothing other than synthesizer finally “The Stream” breaks loose with a bunch of blackmetal violence. Guitar noise, fast drums and still that ambient sound in the background. Fortunately this also has his end and we get up to a more relaxing intermezzo. The grunts are also typically blackmetal, no way to understand them but they sound cruel. The rhythm is kinda catchy but for the rest it’s not very original. I didn’t really get the folk or Viking part until after 7 minutes of the song out of the blue a flute appears for 20 seconds. The song takes 13 minutes and I catch myself on loosing attention. The music isn’t really bad, but it doesn’t stay interesting. With the intro it had my full attention and I was really interested but I find the album slowly falling to the back of my mind even when I’m listening.
“Realms Forged” the third and last song of the album. With 18 minutes this too is a long wait. This song too needs several minutes to finally get going and than it just isn’t good enough. What I find very frustrating is that I understand the idea behind the music, but I think it just didn’t really work out the way it should. It’s not such a bad record, but it’s not good either. In the last song is an amazing low man’s voice though, that’s definitely worth something! But when that becomes the most extraordinary about an entire album, the album is overall not good enough. But well, these guys have just been working on this for a few years, so let’s hope we’ll see some more of them, and than with something more special.