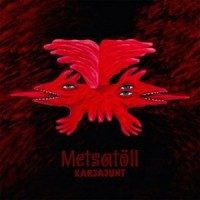 We had to wait quite a while for this new album ‘Karjajuht’ by Metsatöll. The previous studio-album ‘Ulg’ is from 2011, in the meantime we got the great live album ‘Tuska’ named after the great festival.
The albums starts nice at once with a beautiful ethnic tune, very nice. And it stays nice when the usual solid Metsatöll sound joins in.

A very nice and typical Metsatöll song, a kick-start of this new album. Followed by the first one of the two singles of this album ‘Lööme mesti’, ‘Tõrrede kõhtudes’ is the other one.
Metsatöll’s music stays very basic with their, for a folk-metalband, small line up of four musicians. The solid bass is one of the characteristic elements, as you can hear in the great song ‘Must hunt’. No, this isn’t the first English song of these Estonians, it’s Estonian for Black Wolf. An delicious catchy song, with very nice flutes.
And this album has really started by now, we get a bunch of nice songs. And who cares you can’t understand what they’re singing? They actually have a wordt Öö in Estonian, it means ‘night’, what do want more.
Something which has improved is the integration of the authentic instruments, they are omnipresent at Karjajuht and they have an awesome role in these tracks, and a lot of instruments are used to, all giving their own distinct flavour to the music. Lauri gets quite busy playing these songs live, because different instruments are used in one song, like in ‘Mullast’ in which no less then three authentic instruments are use. But we know these guys do this live if it’s a piece of cake. It’s very impressive to see these guys live, using all these instruments in such a nice way.
This album ends with the quieter track ‘Talisman’, with the more solid Metsatöll elements, but more like a traditional folk-song, makes you want more.

And that’s strange, I want more, but when I play Metsatöll for a while, I’ll always get quite filled up after a while. Where I can listen some bands for hours, this isn’t the case with Metsatöll. The songs aren’t all the same, that isn’t the case, but the ‘main theme’ of the music has a bit too much of the same ‘feel’. I can’t describe it in a better way.
But what remains is a strong album. I’ve listen to it many times and it fills me up with joy and pride every time. It’s no doubt ‘Karjajuht’ is one of the better Metsatöll albums.