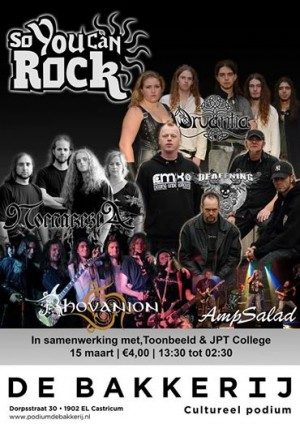 On a cold Saturday night I travel to the small town of Castricum. Today, the one-day event So You can Rock is organised in the ‘Bakkerij’ in Castricum. Although the program has already started at 13:00 PM I am only there to review the three folk metal bands that play in the evening. The Bakkerij is known as a cultural venue, but is best described as a local pub with a wide range of cultural activities. There is little space for a stage, so the bands have to play amidst the crowd in the middle of the venue. This however is the perfect location for such a small concept. Time to go in and see how the bands are faring inside.

Nornagesta
Nornagesta has the ungrateful task of warming up the audience after the immensely long break of three hours. After just arriving in Castricum I dare not determine whether people have gone home in the afternoon or that people will be coming in later for the headliners, but the attendance is rather low. Time to take a look inside and see how the bands are doing anyway. Unfortunately the sound is extremely bad which makes me feel like I am standing amidst a wall of sound. Such a pity, because the sound ruins the rest of the gig. People are leaving here and there, which is understandable given the fact that the sound is unbearable. I was really looking forward to seeing Nornagesta live, but unfortunately I have to conclude that the band cannot live up to my expectations tonight. After quite some time the set finally comes to an end and my eardrums are finally allowed some rest.
Score: 6.0/10

Druantia
The band Druantia from Brabant has a hard time tonight, since three of the five band members, including both vocalists and the drummer are ill. Yet they are on the stage in Castricum tonight to make the north of Holland shake on its foundations. After a very long sound check and the crowd becoming impatient it is finally time to see this quintet from Brabant. Front animal Rik gets the crowd along with ease, making the crowd headbang along with the songs, and even makes a couple of moshpits arise here and there. The rather ‘tame’ audience of the evening is finally getting a little looser. While it is noticeable that the flutist has it rough at times and there are some technical flaws here and there, the audience seems content. Rightly so, because the band shows all that they’ve got to make it a successful evening despite all the setbacks. While the end of the set is approaching, Castricum is the first place to be treated to a new song, which, unlike the previous work, is slightly more raw and blunt in sound. This relatively short set is successfully concluded and the audience seems content. Despite the circumstances this may not be their best performance, but surely some credit goes out to the gents and lady from Druantia!
Score: 7,0/10

Rhovanion
Tonight Rhovanion has the honor of concluding the evening with a nice dose of folk metal. Unfortunately the flutist and bagpiper will not be here tonight, and the band has arranged for a substitute player in the form of Amma’s violinist. Credit to this young lady who has rehearsed all of Rhovanion’s work in relatively short time. Unfortunately Rhovanion’s violinist is unable to play a complete set due to physical problems, so the addition of the second violinist is a good choice. However, the addition of this second violin doesn’t really do much for the music. The flute parts are responsible for a great deal of the music that makes Rhovanion special, and now that they’re absent the band has to lean on both violins that tend to overrule each other. This is literally a supporting role. The music sounds empty and hollow, it is perfectly clear that something is missing. Nevertheless the band puts up a decent show. The crowd makes an attempt to do some headbanging but soon has enough of it. This is not the bands’ fault, because the tame audience has influenced the entire evening. The set is closed with the new song ‘Evil Spawns in the Night’ and the usual cover of the ‘Worker’s Song’ by the Dropkick Murphy’s. Despite everything the band has given yet another good performance.
Score: 7,5/10