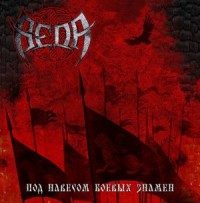 I ended my review on their previous album with the wish they would keep the direction pointed out through the songs on that one. On their last album there’s more space for flutes towards the end. Now their back with ‘Pod navesom boyevykh znamon’, which means ‘Under the Shelter of Battle Flags’.

The start of this album couldn’t be better for me. Immediatelly a very nice flute playing a nice Slavic tune. Very soon the metal starts in and the power gets up in a nice way, but the flutes keep their important role. Ksenia give it a nice smoothing touch with her vocals, but don’t even dare to think Veda gets all lovely, Artem makes an end to all this with his good fierce and grim metalvocals.
There are lots of changes in mood, power and speed, not only the songs differ more then they did on their previous album, there are lots of shifting moods in the songs too, Kii-Kuznetc is a nice example of this. The songs reminds a bit of Kivimetsan Druidi, and doesn’t only show Veda can handle several styles, but the female vocals are multifunctional as well. Traditional Slavic, but a bit classical like in this song, it’s all in her backpack.
From here Veda moves on with the grim and fierce Vitiaz’ to the slower and more lovely warm Kto zde’voronov kormil.
And all this contradictions culminate in Nezriachii, where the warm and comforting music lead by the female vocals are alternated with an incredibly aggressive sounding piece led by the male vocals. And this awesome track is followed by the rather catchy Gordii Rusich.

Veda really made a step forward with this album. Their debut was already nice, but they have grown. Their music has more tension, there are great changes in their music and it has more of the folk-influences I hoped for. So, I can really say Veda did a great job with this album.