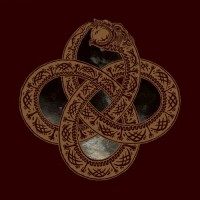 Best albums of the year lists. Everyone in my surroundings seems to do this; picking the best albums that were released at the end of the year. I never do this. However, I do know a certain album which would be really high in one of those lists, if I ever decided to make one. Agalloch delivers a true masterpiece with ‘The Serpent & The Sphere’.
Let’s take one step back. Who or what is Agalloch exactly? Agalloch is a four-piece band originating from America, which makes atmospheric black metal. Many times some doomy influences can be found throughout the songs, which can be clearly heard in the first song ‘Birth and Death of the Pillars of Creation’.
The band excels in their beautiful guitar melodies. Not only the leads, but also the rhythm parts ensure I’m sitting here with goose bumps. Songs that build up in a beautiful way, where vocals and guitars play the lead role. Black and doomy passages interchange just as easily as the acoustic and the amplified ones. Everything is in perfect balance.
Agalloch released a true masterpiece with this album. The melodies, which are at the same time pure, melancholic and vivacious, ensure that you easily listen to this pretty long album (one hour) in one take. Definitely worth a listen!!