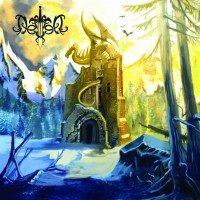 Delion released a Demo last year, now it’s time for a first real album. ‘Tales of the Northern Realm’ is an EP containing 5 tracks and I’m very curious, because I quite liked the music of the demo, but the recordings were very bad.
The EP starts with ‘The Awakening’, an nice and easy but epic intro, done by the keys mainly. This turns into ‘The Devastated Land’, and although I’m still not fond of the vocals they’re much better then they were on the demo. The sound of the drums is much better too, although they’re still a bit muted. But I don’t know what to think of this track. Of course, when you tell about a devastated Land, you try to picture this with the music. But this is such a mess, I have stopped the music several times to make sure, not other music programs on my computer were playing a song at the same time. There’s no unity in the sound.
‘The Queen of the Ancient Northern Realm’ would probably not appeal to everyone, but I like it. A shame the accordion sound isn’t original, but done by the keys, but I like the nice guitar and melody in this track. It’s funny, weird and contagious. Long live the Queen!
The Last Ice Dragon is an epic track, which sounds quite nice, if it wasn’t for the keys, which are way too loud again, something which was annoying on the demo already.
The intro of ‘The Alliance’ shows what nice things you can do with a keyboard. Nice intro.

It’s good to notice Delion made some improvements regarding their sound, but it isn’t enough. The sound of the drums are much better, the vocals are better and the keys are less annoying. But there is still more work to be done. They probably mixed it themselves or it was done by someone who doesn’t dare to point out the weak spots. And that’s a bit of a shame, because with songs like ‘The Queen of the Ancient Northern Realm’, they cleary show their up to a lot more.