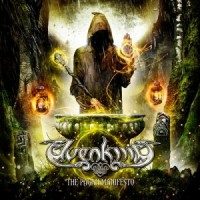 2 years after releasing Era, I find myself in the fortunate possession of having another Elvenking record on my desk. The Italians who bring the metal-world their unique mix of power- and folk-metal are ready to bestow us with their eighth album. The Pagan Manifesto!

A rippling stream and acoustic guitars and later on a wonderful flute, The manifesto has begun. Than the first song, King of the Elves. Personally I think this song is a bit less compared to the rest of the album, only because of the completely irrelevant “Wohoo” through it, but besides that it’s a great song, up-tempo, catchy, power and yet the known violins, Elvenking as we all know it. The King of the Elves is back!
Elvenlegions, a song no doubt dedicated to the “hard-core” of Elvenking fans, “The Elvenlegions”. The fires of purity, minority, we are the elven legions on the rise!
The record has much more folk influences as we know it from the older albums, where Era and Red Silent Tides had more power or even a bit Gothic sound, this time we’re heading for more folk than ever! The band as well made a clip for this song on a beautiful location at an old ruin.
After Elvenlegions the up-tempo folk-power tunes will rush at you and tales of druids and witches come closer than they ever did.
With The Solitaire I get this “Scythe” feeling and that’s actually a very great thing between all of the folk. Through the years I’ve noticed that Elvenking is kind of a love it or hate it band and I can see why people think of it that way, but for me, it’s definitely a love! The Solitaire is now such a song where this love or hate element is there and the folk listeners may not really like the song, but for the common listener of a real Elvenlegionair this is amazing. Than follows Towards the Shores, as every album this one too has an acoustic masterpiece, here it is. Another beautiful song to close your eyes and feel one with the music. Than again some more typical Elvenking music. I just want to say something about the song “Black Roses for the Wicked one”, what an unbelievable amazing song that is! Emotion, excitement, sing-along, I really like this!
The last song is Witches Gather, to finish the record properly. It’s kind of an short musical summary of everything this album has to offer, everything is in it, in little over eight and a half minute you can feast on all the delicious things you’ve just had, what an amazing job these guys have done once more!

Conclusion, I think it’s clear already, once again an amazing masterpiece from these Italians, The pagan legions of tomorrow and I’ll stand up front heaving the banners!