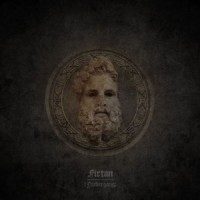 Firtan is a band from south Germany that was established in 2010, and after some line-up changes, released their first EP ‘Wogen der Trauer’ in 2013. This year the band releases the album ‘Niedergang’ as a sequel to the EP, which is partially based on songs and poems from old Germanic philosophers such as Hegel and Vischer. The album features collaborations with various guest musicians and the album is entirely self-released.

Firtan was established with the purpose of combining epic melodies with black metal. Because bands rarely fall within one genre it is sometimes difficult to categorize music. This is also the case with Firtan, who make many trips to genres such as prog and post-rock in addition to their melodic pagan black metal sound. This makes the album sound a lot more dark and complex than its predecessor Wogen der Trauer. In terms of genre the band is best described as an extension of bands such as Thyrfing and Enslaved, but every now and then I can also discover the slightest hint of bands such as Moonsorrow and Agalloch.
After an ominous intro the album kicks off with the song ‘Angst’ in which the heartrending cries of frontman Philip Thienger can immediately be heard. The first song immediately sets a rather depressive tone for the rest of the album and manages to captivate from the very beginning. The song ‘Hypnos & Thanatos’ sounds a little less depressing than its predecessor and is slightly more up-tempo, which keeps the transition between songs smooth and supple. It should be clear that Firtan heavily relies on the keyboard parts besides the loud guitar violence and drum parts, because these are very prominent on the new album. These parts however, provide the desired diversity on the album, which makes it easy to listen to and occasionally make the music take a breather. The over 9 minute long song ‘Firtan’ is without doubt the highlight of the album, in which the aforementioned keyboard, orchestral elements and a large amount of tempo changes provide a wonderful atmospheric whole. The structure of the songs is great and shows us that there’s room for some quiet interludes every now and then, as can be heard in the song ‘Seelenfänger’ which features an acoustic guitar and harp. This acoustic guitar is then carried over to the next track of the album ‘Wogen der Trauer’ named after the first album, which again is supported by orchestral elements and a choir. The song ‘Oneiros’ is completely instrumental, and the guitar solo that can be heard belongs to none other than Roman from XIV Dark Centuries. The album closes with the over 8 minute long song ‘Huckup’, which is ushered in by a beautiful acoustic intro in which even a violin is present.

Firtan has delivered a great record with Niedergang. Compared to its predecessor, the compositions on the album are a lot more varied and complex, and the whole sounds a lot more mature than Wogen der Trauer despite the relatively young age of the band members. When confronted with the question whether the new album is better than its predecessor, I have no answer. It’s different, but it’s a nice sort of different. Listen and judge for yourself!