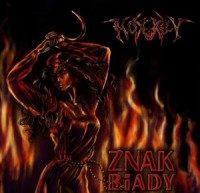 Hok-key is a band which exists quite a few years, 20 years is a memorable period! Why is it we’ve never heard about this band? Well, the explanation is simple they experiment a lot with their sound. This means they aren’t always producing the same kind of music. Since the time they added a violin-player to the band, it’s obvious their music changed. One of the things a violin is very suitable for is of course folk, so it’s an obvious choice to explore this element.
One of the aspects Hok-key tried before are Belarus lyrics, and I’m glad they used this on their new album Znak Biady.
The album has quite a nice start and surely is one which keeps me interested. Kalinaj Čyrvonaj, the third track shows all kind of nice elements the band has in store, the violin, the warm clean male vocals, the good female vocals, the solid guitars, but a lot of clean guitar-riffs as well. Nice, nice, nice, a bit a shame there are some weak spots in this song, because there’s a lot of nice stuff in it.
In Klič kryvi, we can hear the bass-player isn’t only supporting the bands sound, but has some nice pieces of his own, great stuff.
You can not state Hok-key is a folk-metal band, but referring to their music as folk-influenced melodic metal is quite nailing it, I think.
The worst thing about the band is the name, it’s better to pretend it’s a local dialect meaning ‘Beautiful Belarus’ or something like that and not what we all think it is.

It’s not dripping of folk, but it has nice folk-elements, combined with good music. I can only conclude Hok-key is going in the right direction and I can spot no Znak Biady (Sign of Misfortune) at all. I hope they keep exploring their possibilities, but they may stay on the track they’re on, as far as I’m concerned.