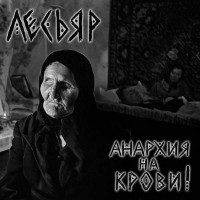 Lesiar is the project of Lesiar, member of the Pagan-metalband Nevid. Lesiar adds a bit of folk to the pagan released with his project an full length album before. This time it’s a single with four tracks. But because he calls this a single Anarhiya na Krovi (Anarchy in the blood) is the main track.
A nice track, Lesiar’s voice is clean, but in the raw Russian way. The music is fierce, with fast, raging guitars. The ‘background’ singing is almost in a kind of punkstyle, which gives this a special flavour. The lyrics in Russian don’t have a clear story to me.
The second track is totally different, we hear sounds of a distant war. People digging, while Lesiar tells a short poetic story about the dead in the mud.
The third one Vodka, has very nice folk-elements, supported with a nice violin. A song about the mist in your head when you drink too much.
And this leaves us with the last track Surovyye gody, which is, like the second track, a very strange piece of work. Because it’s Russian poetry it’s very difficult to understand. It’s sounds very intriguing though.

This is clearly a single and not an EP, the second and fourth track are no real songs, but nonetheless very interesting to listen to. What remains are two nice songs. The raw voice of Lesiar the steady resting spot. With his strong visions he guides us through his mind carried by a flood of rough pagan metal with a touch of folk to soften it a bit. You have to like this kind of stuff, but it needs your own opinion to judge this.