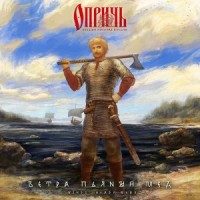 Oprich isn’t a band which walks on the obvious path all the time. After a remarkable project ‘Triunity’ with two other bands in 2012, they released a beautiful full length ‘Birthless Heaves’ last year. Now they turned their eyes towards the ancient past. The time the sky was brighter and higher, the winds of the Volga expanses were fresher, and people forged their fortune in a braver manner.
Those who ran up the shaky gangways on steep boards of Novgorod boats, whose hands used to the oar weight long ago, and whose eyes were ready for unceasing gazing into the blinding distance of the stream way – towards the Fate!
The Ushkuiniks. Oprich opens a new page and is ready to tell you about these fearless daredevils of the Russian North – warriors and pioneers, robbers and avengers, those who steer their fast boats to the Unknown. The first tale Oprich has for us is told on the mini-album “Winds’ Heady Mead”, on this limited one-sided 12″ limited Vinyl release, you’ll find three brand new songs by OPRICH, and a remake of temnozor’s heritage – the song “Folkstorm of the Azure Nights”.
The LP envelope includes lyrics and their poetical translation into English.
The songs are typical Oprich songs. Quite slow, but solid, with decent guitars forming a thick fierce layer on which the flutes sail over the Volga. Clean guitars battle their way, like ‘In Oars’ Splases’, while the fierce drums and solid guitars echo the devastating power of this river.
But there’s a clean side to Oprich as well, listen to the quite lovely ‘Volga Lullaby’, when the river is calm and soothing. You can almost feel what the band is singing about.
And at the end of this nice platter there’s this beautiful version of ‘Folkstorm Of The Azure Nights’, a song which fits perfectly in this short story.

My compliments to Oprich for this nice piece of work, it made me very curious about their intentions with this. Do we get a number of these kind of mini-albums forming a larger story all together? I’ll surely hope so. For the fans of rather slow, blackened fierce folk-metal, this is something you should try.