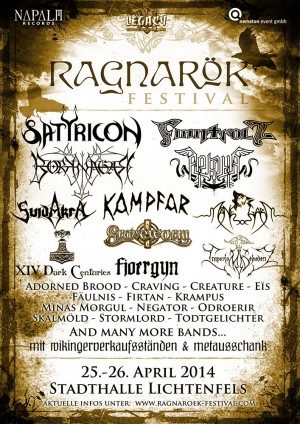 Ragnarök is a small festival that’s taking place in Lichtenfels. However, never let the size of things misguide you, because on this festival the best of pagan- folk- and black-metal come together. With bands like Arkona, Finntroll, Skálmöld en Manegarm, there were enough bands for the folk-metal fan to enjoy. And, as it should be at every festivals, with bands as Craving and Firtan there was enough to discover.
One of the main advantages, besides the low price for a 2 days festival, is that the festival is indoors. 2 stages, which makes it theoretically possible to see all bands, so pretty much perfect. While the festival was suffering from a really bad sound the first day, this couldn’t spoil the fun. Below you can find the full report on the Ragnarök festival. Enjoy!

Craving
Craving was the band that opened the festival. With a ridiculous short stage time of only 20 minutes, the band needed to hurry. Luckily they played a more than decent show. Melodic black / pagan with a high pace. Really catchy, which made sure the first headbangers could already loosen up their necks and let their hairs fly. The band played with a lot of energy and really seemed to enjoy it. Definitely a band worth to keep in mind!
7/10

Krampus
I was already afraid to see what has become of Krampus. Their first album ‘Survival of the Fittest’ was a perfect mix between folk-metal and metalcore. The new songs couldn’t bother me that much and made me less hopefull. The absolute worst was at Ragnarök. The sound was just disastrous; there was no balance in the mix at all. The flutist overblew almost constantly, resulting in everything being out of tune. Besides that, only the ‘-core’ parts could be heard clearly, and thus it didn’t sound better than the average bad metalcore band. Too bad, there debut album was so great.
4/10

Ingrimm
After the desilusion of Krampus, it was time for the German folkrock/metal from Ingrimm. While the last album was a bit harsher than their previous work, the live-sound was even more brutal. The guitars were grooving, the double bass rattled like crazy. And while the sound was pretty brutal, the melodic side of the music wasn’t forgotten with the violin and hurdy gurdy, which were placed a bit too soft in the mix maybe. Nobody actually cared though, because the whole show was pretty decent. 7/10

Arkona
I’ve always loved the small Masha-named woman who was always jumping around. Of course I’m talking about the vocalist of Arkona. Although the new album couldn’t bother me up until today, it’s always great to see this band live. Most of the time, that is. The sound was so bad that there wasn’t much to enjoy at Arkona. Of course, the band was enthusiastic, and Masha jumped around as we know so well, but if it takes almost half of the song to actually recognize which song was being played, the fun is soon over. Too bad, but better luck next time.
5.5/10

Finntroll
Today would be the first time I’d see Finntroll playing songs from their new album. Too late of course, I know! Finntroll mainly played songs from their last album, though they only played the best. Highlights were ‘Skogsdotter’ and ‘Blodsvept’. You can clearly see that Finntroll are professionals. Everything was right about their stage performance; the outfits, the interactions with the audience, the enthusiasm. Too bad the sound wasn’t that great, it could’ve made this show into an absolutely amazing one, instead of just a really good one.
7.5/10

Kampfar
While the sound was pretty bad throughout the day, you couldn’t notice any of these troubles as soon as Kampfar entered the stage. All of a sudden, the sound was close to perfect. This ensured almost immediately that this was one of the better shows of the day. The paganblack of Kampfar was harsh, brutal and with a great sense of melody at the same time. The interaction with the audience was great and the band clearly seemed to enjoy their time on stage. The conclusion is simple; Kampfar was a more than worthy headliner for the first day!

Firtan
No time to wake up slowly on the second day! Although Firtan only had 20 minutes stage time, they used it pretty well. Great melodic black. What immediately caught my attention was that the sound wasn’t as bad as the day before. 20 minutes is just not enough for a band like Firtan, but they certainly found a way to convince. Great set, just way too short!
8/10

Waldgeflüster
From bad to worse, if you haven’t woken up at Firtan, then you certainly did at Waldgeflüster. Pounding black metal in the early morning, nothing wrong with that right? Although I’ve never heard from this band before, the harsh sounds appealed to me. Pretty standard, but well executed. Also, the sound was still pretty good, so there was still hope it’d stay of an acceptable level throughout the day. Just a small remark; the band was ordered to stop playing halfway throughout the song, because they didn’t have enough time anymore. That doesn’t show any respect towards the band and the fans in my opinion!
6.5/10

Odroerir
After two bands that were more orientated towards black-metal, it was time for some pure folk-metal; Odroerir. Although the bagpipes sounded a bit dissonant by times, it actually was pretty enjoyable. Odroerir provided, in contrast with the previous bands, some joyfull tunes, something that the audience could definitely appreciate.
6.5/10

Skálmöld
Skálmöld. Perfection. Two words that can be used together in a natural way. The show that Skálmöld played this day was one of the best I’ve ever seen from the band. Besides that it was by far one of the best bands of the festival. Please allow me to elaborate on this, before you all think I’m a typical Skálmöldfangirl (which might be true, we never know!). The sound, to start with, was close to perfect. The band played without making a single mistake and clearly seemed to enjoy it, according to the smiles on their faces. While the set was a bit calmer in the middle, the audience could enjoy hits like Gleiplnir, and of course the perfect ending ‘Kvadning’. Great show, great set, I want more!
9/10

Adorned Brood
That people in Germany love Adorned Brood was proven once again at the Ragnarök festival. A giant mass of fans gathered in front of the stage before the band started. The chemistry between band and audience was great and both reacted really enthusiastic. At almost every song there were hands or hairs that were thrown in the air and almost everyone sang along. The sound was fine, and to my surprise even the flute could be heard clearly. A great performance by these Germans!
8/10

XIV Dark Centuries
This band definitely knows how to set the mood! It was already clear at the intro, when Vikings, fully dressed in armor, stood at both sides of the stage before the band entered. These Vikings strengthened the atmosphere even more when they convinced the audience to clap along. The band was on fire and played really well, and the energy was easily transposed to the audience. The sound was fine as well, which made it easier to hear the great melodies. All in all a pretty awesome show!
8/10

Finsterforst
Although I saw Finsterforst already the week before the festival, they made such a great impression that I couldn’t let the opportunity pass by to see them again. The set was a bit shorter this time, but in this time the band showed what they stand for and demonstrated that Finsterforst is a force to be reckoned with. Amazing pagan black with atmospheric passages. That this kind of music doesn’t always have to be serious all the time is proven by the song ‘Försterhochzeit’, that was sung along loudly by the audience. Great, but just way too short!
8.5/10

Fjoergyn
In the same category as Finsterforst is the band Fjoergyn. Of course, they’re not entirely the same; Fjoergyn is a bit calmer and more atmospheric than the previous band. Maybe this is also the reason this performance couldn’t bother me as much as Finsterforst. It all felt a bit monotone and without energy. Maybe the fact that I didn’t know any of the songs helped me to draw this conclusion. Okay’ish performance, and although the musicianship was great, it couldn’t bother me so much.
6.5/10

Stormlord
I must confess that I haven’t seen much of Stormlord. At first hearing the band sounded so much like typical, standard black metal that I couldn’t find the motivation to watch it for more than a few songs. ‘Nothing more than pretty okay’, is the only conclusion I could draw after a few songs. I didn’t see the whole performance of this band, this because I wanted to be rested and in time for the next band; Trollfest.
5/10

Trollfest
When you book Trollfest on your festival, you know beforehand that it’s going to be a hell of a party. It wasn’t any different at Ragnarök. Since they just released their new album ‘Kaptein Kaos’, they naturally played many songs of this album. Besides that, classics like ‘Der Jegermeister’ weren’t forgotten, just like the genius cover of Britney Spears ‘Toxic’. Besides all the sonic violence, there was also enough to see on stage. A topless woman on stage, someone dressed up as Abbath from Immortal that joined in to play the tambourine, nothing was crazy enough for this band. When after that the band members went stagediving and running through the audience, the Kaos was complete. The band proves it every time; Trollfest is always a great reason to party!
8/10

Manegarm
While Manegarm is a lot more serious than Trollfest, this band always ensures the motion of heads banging, fists in the air and choruses that are sung along by the whole audience. Manegarm played a lot of song from their new album this time. Luckily they played only their best songs of this album, which included ‘Legions of the North’, ‘Sons of War’, and ‘Eternity Awaits’. However, this didn’t mean they forgot their older stuff like ‘Sigrblot’ and the beautiful closing piece of ‘Hemfärd’. Great performance with enough alternation between old and new stuff.
8.5/10

Satyricon
Let’s be honest; Satyricon was the true headliner of the last day of Ragnarök, not Todtgelichter or Negator. The catchy black metal was received pretty well by the large crowd. While the new songs resulted in a slight dip in the great atmosphere, there were enough classics to get the audience headbanging and singing. K.I.N.G. and Black Crow on a Tombstone are always great of course. A more than worthy ending of this 11th edition of Ragnarök.
8/10

Well, okay, maybe that’s not entirely true. After Satyricon, two more bands were planned; Todtgelichter and Negator. Todtgelichter didn’t sound all that interesting, and waiting for over an hour before Negator started playing, a band I’ve never heard of before, was something that wasn’t entirely my cup of tea. And that’s why Satyricon was the last band I saw at Ragnarök, a festival that will always be remembered as a festival with a precarious sound, even more precarious weather, an amazing atmosphere and great bands. See you next year!