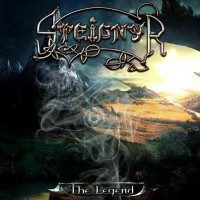 Steignyr a Celtic Folk Metal band from Spain, released an EP. What are they up to?
The intro Wrath of the Gods is a short atmospheric instrumental piece. Nice, now on to the real world.
The up-tempo track Dragon’s Tale starts, this sounds rather nice, but then the female vocals start. Wow, this isn’t nice anymore, what a shame of such a nice track. The female vocals are overdone.
Celtic lands starts rather slow, with nice solid guitars, after which another nice tune develops. Nice pounding drums and guitars give this track a nice feel, but again the female vocals are a bit ‘too much’. Well, so far, a bit disappointing.
But fortunately Steignyr has the track carrying the bands name for us. And it’s here the female vocals sound as they should, this track becomes better with this female touch. The song is rather catchy and carries the band’s name with honour.
But after this track, sadly this EP is coming to an end with another instrumental track. Leaving me a bit confused.

Surely ‘The Legend’ won’t make a legend out of Steignyr. And I can’t say it was a real pleasure all the way. If this was a demo, I would have become very curious. Dragon’s Tale and Celtic Land are promising songs for sure. But the track Steignyr is very good. It seems to me it’s not all finished. The keys are not pretty everywhere and the female vocals can be done a lot nicer as the band proves in the song Steignyr. It’s because of this track this EP gets a rating of 6,0. A shame the keys are ‘too much’ in this track. I hope they will do this album over again and adjust the level of the keys and improve the female vocals in the other two tracks with vocals.