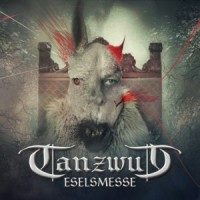 We don’t do Medieval records usually, but there are some two faced bands, like Saltatio Mortis and Tanzwut for instance which make Medieval albums, besides their rock-albums. These occasions are an opportunity for us to step out of line. This time it’s up to Tanzwut to release another medieval album. So, let’s put on our Medieval outfits, and take of to the Donkey Fair to grab a mug of mead and feast.

In the Intro, the Fair is announced so we’re prepared. In the second track we can do some serious Ass-dancing, because the danceable medieval rhythm are immediately upon us. Great bagpipes play a tune which makes, you a pint behind the reality from the start.
The drums starting the third track don’t sound very medieval to me, but nonetheless great and then again nice bagpipes, creating this nice medieval atmosphere. The instrumental songs are alternated with songs with lyrics.
The only thing missing is probably the live-atmosphere. At first I was of the opinion is was all rather bleak, but this isn’t the case, turning up the volume doesn’t help either. Tanzwut failed to grasp the live-feel on the album and Medieval music needs this.
But when you have a bunch of Medieval Madheads over for a party, the fat is dripping of your meat and the mead is flowing, your loudspeakers should be flowing of this great stuff.