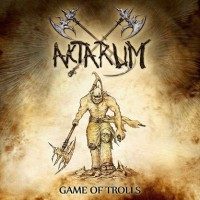 The trolls are back! After their debut-album ‘Gang of Trolls’, which was released in 2010, it became quite quiet around these Belgium Trolls. Right now they’re back with a new EP, called ‘Game of Trolls’. Fairly easy to guess to which popular TV-show they made a reference, isn’t it?
The band is playing, as they like to call it, ‘Troll-metal’, and while trolls take up a big part in their music, it’s hard to say how the music actually sounds. The band is playing a kind of epic black-metal, with ‘catchy’ being one of their keywords. After hearing this EP you’ll walk around with these songs stuck in your head for a few days at least. The keys are prominent, the vocals sound pretty ‘trollish’ and the drums and guitars are pounding, just how it’s supposed to be!
The overall pace of the songs is high, and is ideal for headbanging. The songs are therefore great to be played live. Just one small remark; the production isn’t perfect. The keys are by times a bit too much, resulting in the guitars being pushed a bit too far to the background.
All in all this EP turned out great, and we can only hope that the band doesn’t keep us waiting that long before releasing an album that is just as good!