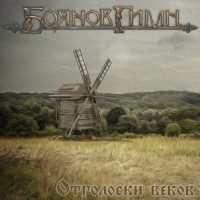 Freaking distorted guitar and very Russian male vocals, are the first things you’ll notice when you’re going to listen to Boyanov Gimn’s new album. Otgoloski Vekov is the third full length of Boyanov Gimn. Their last full length was released in 2011 and since then we only two singles were offered to the world. But now they’re back with a full length which is available as a free download at their VKontakte.
As mentioned the distorted guitar is a trademark of Boyanov Gimn, they sound like the punk and rock from the eighties. And give the band a nice sound of their own. The production isn’t of the best quality, which give it an extra old touch, but that’s a bit of a shame. The drum-recordings suffer from this quality-failure the most, their hollow sound is not what we like to hear. Besides the nice and strange guitars is the Bayan, the Russian accordion an instrument which is standing out. I don’t know if this is a typical Russian style of playing this instrument, but I guess so. This adds a very nice touch to their music, the sound is full like we know from the accordion, but it’s played a bit in a staccato way. The different tone-color and fuller sound of the bass of this instrument give it this nice taste.
On this album are 13 new tracks and after this two Schmeli covers are added to complete this album.

A nice album to listen to, not one you run to the nearest shop for, but it’s for free and that makes it something worth your while. It’s a nice add to your collection and since it has this nice bayan, the Russian accordion, it’s something with an unique sound. A bit a shame the recordings and mixing could have been done a little better.